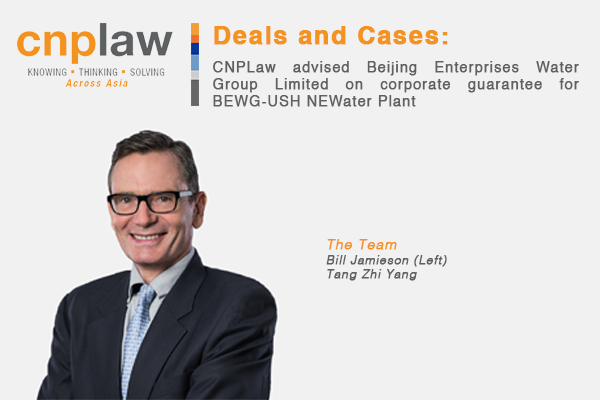 The Team Advising On The Corporate Guarantee: Bill Jamieson and Tang Zi Yang.

Sited on top of the Changi Water Reclamation Plant, the BEWG-UESH NEWater Plant has a capacity of 228,000m3 or 50 million gallons a day. Together with four other existing facilities, the new plant provides enough NEWater capacity to meet up to 40% of Singapore’s total daily water demand. The BEWG-UESH NEWater Plant was awarded Water Deal of the Year in 2016 at the Global Water Awards organised by Global Water Intelligence.


Get To Know Bill

Bill is an English lawyer who is also registered to practise Singapore law and he is recognised by professional and commercial publications. According to Chambers and Partners, Bill is “experienced in providing regulatory advice and drafting fund documentation.” For 2020, investment funds,  IFLR1000 has rated him as “Highly Regarded” and  Asialaw Leading Lawyers has ranked him as a “Distinguished practitioner”.