In previous articles in this on-going series of articles on cryptocurrencies, blockchain and Initial Coin Offerings (“ICOs”), we discussed how 10 different jurisdictions around the world regulate ICOs, including the approach as set out by the Monetary Authority of Singapore (“MAS”) in their Guide to Digital Token Offerings issued on 14 November 2017 (the “MAS Guide”) and the definition of “securities” under section 2(1) of the Securities and Futures Act (Cap. 289) (the “SFA”). In this update, we explore the MAS Guide and MAS’s Guidelines on the Regulation of Markets (Guideline No: SFA 02-G01, 1 July 2005) (“Market Guidelines”) which may apply to Bitcoin and cryptocurrency exchanges. According to Coindesk, Bitcoin exchanges allow the transfer of fiat currencies, such as USD, into Bitcoin or vice versa. Some exchanges also allow Bitcoin to be exchanged with other digital currencies such as Ether, Ripple, Litecoin, etc. (“Cryptocurrency Exchanges”).

As of 1 April 2018, there are no Bitcoin exchanges or Cryptocurrency Exchanges in Singapore that are approved or recognized as exchanges or recognised market operators (“RMOs”) by the MAS.

Each Cryptocurrency Exchange has its own set of criteria to determine which digital tokens to list. Under Singapore law, any Cryptocurrency Exchanges which operate in Singapore must comply with anti-money laundering (“AML”) and counter financing of terrorism (“CFT”) requirements. MAS has in its press release of 13 March 2014, said that it intends to introduce regulations to require virtual currency intermediaries, including operators of cryptocurrency exchanges, that buy, sell or facilitate the exchange of virtual currencies for real currencies to verify the identities of their customers and report suspicious transactions to the Suspicious Transaction Reporting Office. As such, such exchanges should conduct their own due diligence on the token issuers as well as on persons wanting to trade digital tokens. Most (if not all) Cryptocurrency Exchanges do currently conduct their own due diligence and know-your-customer (“KYC”) checks before agreeing to list any new digital tokens and the costs of conducting such checks are passed to token issuers who have listed on their Cryptocurrency Exchange in the form of compliance fees.

Interestingly, on or about 29 September 2017, the Financial Services Agency (“FSA”) of Japan, approved 16 exchanges which allow cryptocurrencies to be either exchanged for fiat monies or alternative cryptocurrencies such as Bitcoin Cash, Ether, LiteCoin or Ripple, etc.  Below is a table showing the 16 approved exchange operators in Japan and the cryptocurrencies offered are shown below: 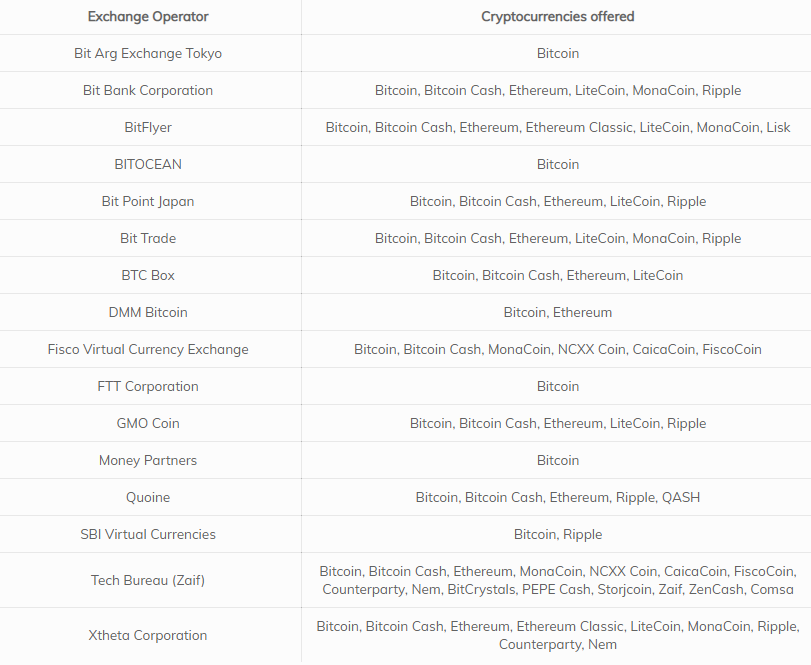 According to the FSA, there were up to 12 other companies seeking endorsement to operate in Japan. As of March 2018, two Japanese exchanges, Mr. Exchange and Tokyo Gateway have since withdrawn their application and ceased trading as a result of FSA inspections and requests.

Regulation of Markets in Singapore

Cryptocurrency Exchange operators which allow trading of tokens constituting “capital markets products” will need to seek MAS’s approval, recognition or exemption under the SFA. MAS’s Market Guidelines provide some guidance on how MAS will administer the legislative provisions relating to such markets. You may access the Market Guidelines here.

MAS will consider the following factors in deciding whether a market operator should be an Approved Exchange or an RMO:

We should also mention that MAS intends to regulate the sale of virtual currencies under a New Payments Framework according to their press release of 21 November 2017. Considering these developments and the global regulatory environment on cryptocurrency exchanges, aspirant Cryptocurrency Exchanges should take note of the Market Guidelines should they wish to submit an application to operate a Cryptocurrency Exchange in Singapore.