The contributions for Singapore permanent residents during the first two years of being Singapore permanent residents are at graduated rates to help them adjust to the lower take-home pay. The contribution rates reduce on a graduated scale for employees who exceed 55 years of age. Ordinary wages are generally the wages paid monthly, the wages due or granted wholly and exclusively in respect of an employee’s employment in that month. Contributions at the above rates also need to be made in relation to additional wages, for example, annual bonus which is not granted wholly and exclusively for the month but at intervals of more than one month and may, for example, be paid yearly. However, the maximum amount of wages including ordinary and additional wages on which contributions need to be made to CPF is S$102,000 which is equivalent to 17 months multiplied by the monthly CPF salary ceiling of S$6,000 which applies to all age groups. The current CPF Annual Limit (which is the maximum amount of mandatory and voluntary contributions to all three CPF Accounts that a CPF member can receive in a calendar year) is S$37,740.

(b) CPF contribution rates from January 2021

The prevailing and new CPF contribution rates from 1 January 2021 (for employees with monthly wages exceeding S$750) is demonstrated below: 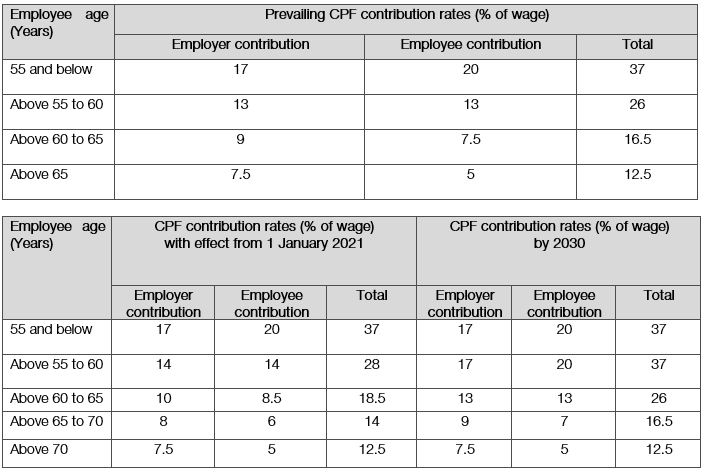 The Special Employment Credit (“SEC”) was introduced in the 2011 budget and is extended up to 31 December 2020, to support employers, and to raise the employability of older low-wage Singaporeans. To promote voluntary re-employment of older workers, employers who hire Singaporean workers aged above 67 earning up to S$4,000 a month will receive an additional offset of up to 3% of wages. Taken together with the existing SEC incentives, employers who employ such older workers would get up to 11% in wage offset.

The fine for first time offenders is up to S$5,000, and a mandatory minimum fine of S$1,000 will be imposed for each charge and/or up to 6 months jail.

Please note that this section of the Employment Law Guide is a summary provided for general information purposes, aimed at aiding understanding of Singapore’s employment law as at the date of writing. It is not exhaustive or comprehensive and reading this memorandum is not a substitute for reading the text of the various statutes to fully understand the extent of the obligations owed. This guide should also not be relied upon as legal advice.