Dementia and the law: common legal issues faced by caregivers of dementia patients 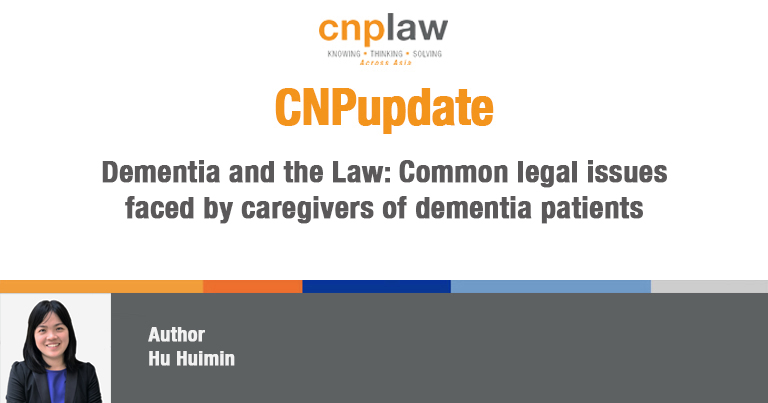 Dementia and the law: common legal issues faced by caregivers of dementia patients

Singapore is an aging population. According to a study done by the Institute of Mental Health in 2015, 1 in 10 people above the age of 60 may have dementia. Often, the onset of dementia may not be clinically diagnosed as the symptoms are not obvious.

This article explores a few common questions relevant to the care of a dementia patient and the possible answers which can be found in the parameters of the Mental Capacity Act (“the MCA”).

(1) Can it be assumed that a dementia patient lacks mental capacity to make decisions?

In the case of Re BKR [2015] 4 SLR 81, the Singapore Court of Appeal clarified that the test for capacity in Section 4 of the MCA consists of two aspects. The first aspect is a clinical component which requires medical professionals to provide an opinion of whether the patient has a mental impairment based on the observable symptoms and any other diagnostic tools available, and if so, what that impairment is, and what effect it has on the patient’s cognitive abilities. The second aspect is the functional component which would be determined by the Court. Based on evidence, the Court will make an assessment as to the degree to which the patient’s mental impairment affects the patient’s ability to make decision when he needs to. For instance, whether the patient is able to retain, understand, use and weigh information relevant to the decisions he has to make.

The case of Re BKR concerned an elderly woman who had poor memory. It was observed that her lapses in memory extended to events which she ought to remember and her relationships with the people closest to her. She was also observed to be paranoid without basis at times which affected her actions. It was determined that her condition was situated somewhere between a mild cognitive impairment and dementia. It was concluded by the Court held that she lacked mental capacity within the meaning of Section 4 of the MCA.

(2) How does a patient’s family determine if the patient is capable of making his own decision?

Section 3 of the MCA sets out the applicable principles for family members and caregivers:

In a situation where the family member or caregiver has reason to believe that the patient is unable to make his own decision in a matter, despite providing information and explaining the matter in question to the patient for his consideration and decision, a decision can be made by the family or caregiver in the absence of a lasting power of attorney (“LPA”) which grants such powers to an appointed donee. Section 7 of the MCA provides that if a person reasonably believes that the patient lacks capacity in relation to a matter relating to the patient’s care or treatment and it will be in the patient’s best interests for such a decision to be made on the patient’s behalf, generally no liability can arise from such a decision under the MCA unless there is negligence or the decision or act contravenes the Advance Medical Directive Act, laws relating to the conduct of a clinical trial or human biomedical research.

(3) What happens when there are disputes between family members on the decisions to be made for a mentally incompetent patient?

In cases where the patient has made a LPA, it is clear that the donee appointed under the LPA shall act or make decisions for the patient in accordance to the principles and regulations under the MCA and the restrictions specified in the LPA. If the donee has engaged in conduct which contravenes the authority granted under the LPA, or acted against the patient’s best interests, an application can be made to revoke the LPA. The LPA can also be revoked if the donee is convicted of an offence of criminal misappropriation, criminal breach of trust, cheating, theft, or offences involving fraud or dishonesty.

In the absence of a LPA, the family may make an application to Court to determine the appropriate person(s) to be appointed as deputy/deputies under Section 24 of the MCA when a dispute arises as to who should be the right person(s) to make decisions for a patient.

Under Section 24(4) of the MCA, the Court may appoint 2 or more deputies to act jointly; or jointly and severally. The Court may also appoint the deputies to act jointly in respect of some matters but jointly and severally in respect of other matters. This would mean that certain decisions must be made jointly by the deputies but decisions falling within a specified category do not require the joint decision of all deputies. The Court also has the power to impose restrictions on the deputies’ powers under Section 25 of the MCA.

It is often stressful and painful for family members to try to resolve disputes between each other when making decisions for the patient. In order to help families to resolve issues amicably, the Singapore Courts encourage parties to attend mediation when an application for the appointment of deputies under the MCA is filed. Mediation may enable the family members to appreciate different perspectives in the hope of finding an optimal solution that is in the patient’s best interests.

(4) Can family members/ caregivers use the patient’s money and sell or rent out the patient’s flat to pay for his medical and living expenses?

If there is a need to sell or rent out a patient’s property, such powers must be specifically prayed for in an application to the Court for deputy/ deputies to be appointed and proven to be necessary.

The Mental Capacity Act was enacted to protect those who lack mental capacity and are vulnerable. Therefore, it is important for the family and caregivers of dementia patients to address their minds to the principles set out in the MCA before making any decision for the patient. If the family has doubts as to whether the patient has the ability to make decisions and the type of decisions that the patient remains capable of making, they should consult the patient’s doctor and obtain an assessment.

If a patient’s family wishes to make an application to appoint deputies for the patient under the MCA, an application under the fast-tracked procedure can be made if the patient’s case is a simple and straightforward case. Further information can be found in our previous article: Newly introduced fast-track application for the appointment of Deputies and the making of a Lasting Power of Attorney under the Mental Capacity Act. Where necessary, legal advice should be sought on steps that can be taken in order to protect the patient’s interests.

Huimin is a Senior Associate with the firm’s Dispute Resolution team and Family Law team. She was called to the Singapore bar in 2012. Her main area of practice is general civil and commercial litigation. She has been involved in various civil trials and hearings before the State Courts, the High Court and the Court of Appeal of Singapore. Find out more about Huimin and read about the CNPupdate articles that she has contributed, showcasing her expertise in this field of practice, one in particular – Amendments to the Mental Capacity Act.