Consultation Paper on the Removal of the DBU-ACU Divide

Consultation Paper on the Removal of the DBU-ACU Divide

On 31 August 2015 the Monetary Authority of Singapore (the “MAS”) issued a consultation paper setting out the proposed consequential amendments to regulatory requirements (the “Consultation Paper”) following the announcement by the Deputy Prime Minister and Chairman of the MAS, Mr Tharman Shanmugaratnam, in June 2015 to remove the Domestic Banking Unit (“DBU”) and the Asian Currency Unit (“ACU”) divide.

Currently, all banks in Singapore must maintain two separate accounting units – the DBU and the ACU. Transactions in Singapore dollars may be booked only in the DBU, whereas transactions in foreign currencies are typically booked in the ACU. In his keynote address at the Association of Banks in Singapore Annual Dinner on 30 June 2015, Mr Tharman Shanmugaratnam stated that the DBU-ACU divide will be removed as, although the DBU-ACU divide had served Singapore well for decades, it has in recent times been losing its relevance due to a number of reasons.

These global regulatory reforms have put all banks on a sounder footing and reduced the relevance of MAS rules that distinguish between offshore and domestic banking activities of foreign banks, as now home regulators require their banks to meet enhanced standards on a group-wide basis.

Together, the enhanced global and domestic regulatory standards have rendered the DBU-ACU no longer useful and Mr Tharman Shanmugaratnam noted that if Singapore were to continue with the divide, this would merely impose an undue administrative burden on banks without materially enhancing prudential soundness or systemic stability.

The priority of Specified Liabilities in Insolvency

With the removal of the DBU-ACU divide, MAS proposes amending section 62(1) of the BA to rank uninsured non-bank deposits in insolvency (i.e. (c) and (d) above) by the currency denomination of the deposits instead. This approach would be a natural replacement of the current priority ranking since the DBU and ACU are broadly differentiated by currency. The proposed priority ranking is as follows:

The AM requirements for banks as currently set out in MAS Notice 640 (the “Minimum AM Requirements”) are applied based on the amount of DBU non-bank deposits held by a bank.

With the removal of the DBU-ACU divide, MAS proposes to apply the AM requirements by currency denomination instead. This means that the current asset maintenance ratios applied on DBU non-bank deposits will henceforth be applied on Singapore dollar non-bank deposits instead. This proposal is aligned with the suggested approach to the priority ranking of specified liabilities in insolvency set out above.

There will be no change to the list of eligible assets, which are selected on the basis of their quality and recoverability and are therefore independent of the DBU-ACU divide.

Regulations 23F and 23G of the Banking Regulations specify the anti-commingling limits applicable to banks (see Table 1 below). These limits are currently expressed as a proportion of a bank’s capital funds.

The anti-commingling policy remains relevant – it aims to limit the reputational risks arising from banks engaging in non-financial businesses and ensure that bank management focuses its attention on the core banking business. Therefore, MAS will continue to apply the anti-commingling limits to all banks. However, with the removal of the DBU-ACU divide, the computation of the limit will need to be revised, as the concept of capital funds will no longer apply for banks incorporated outside Singapore.

MAS proposes to revise the methodology for computing the limits for all banks to be based on total assets instead of capital funds. An asset-based limit is a reasonable measure of a bank’s investments in non-financial businesses and will help ensure that the bank’s interests in non-financial businesses do not become a substantial part of its total assets.

The proposed revised limits, as described in Table 1, are calibrated at lower absolute levels than the current limits, as banks’ total assets are significantly larger than their capital funds.

Table 1: Proposed anti-commingling limits under regulations 23F and 23G of the Banking Regulations

MAS also proposes to remove the limits on unsecured credit facilities to director groups for all banks. The risks of conflicts of interest would be better managed through sound processes and risk management controls. Table 2 provides a summary of the proposals for the application of existing limits under MAS Notice 639.

Table 2: Summary of Proposals for the Application of Limits under MAS Notice 639 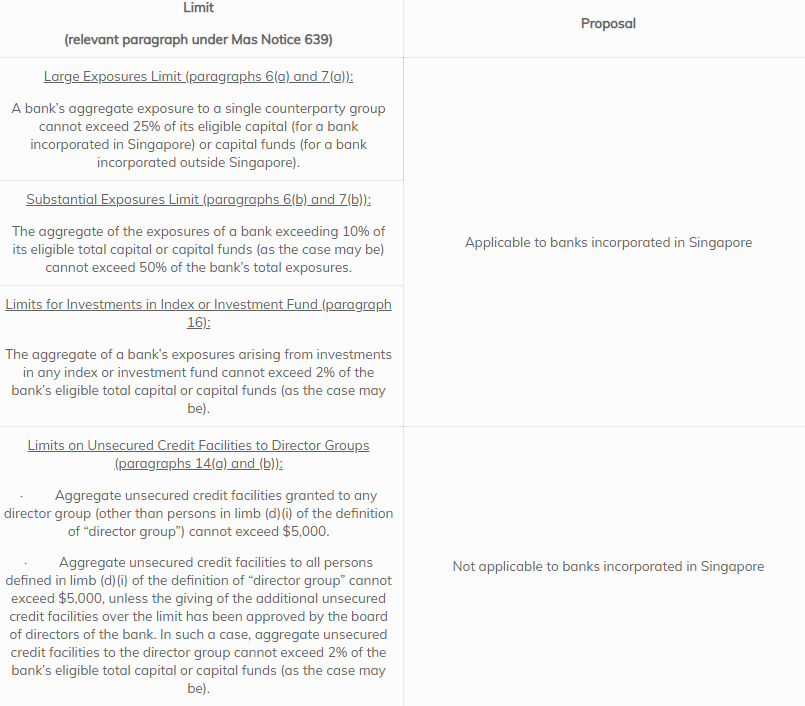 MAS proposes to give banks two years from the time MAS issues the revised regulatory requirements to implement these changes. During this period, banks will be required to comply with the prevailing rules and guidelines in force.

Commentators have opined that the removal of the DBU-ACU divide would simplify Singaporean banking regulations by taking away one layer of regulation which is now, in essence, supererogatory, as the original considerations for the implementation of ACU-DBU divide have lost their relevance and foreign banks in Singapore are now already subject to higher standards by their home regulators. Removal of the DBU-ACU divide would also make banking laws more consistent and would be in line with the Singapore Government’s general approach to legislation, which is to avoid overregulation.

Others have expressed the view that the removal of the divide and the implementation of certain prudential limits should result in a more vibrant domestic banking market as banks incorporated outside Singapore, i.e., foreign banks would no longer be constrained by their capital funds in Singapore intended for the expansion of their domestic banking business.

From an international perspective, the removal of the DBU-ACU is in alignment with the movement towards uniform cross-border banking regulations as increasingly global regulators now work towards avoiding multiple regulations which may lead to gaps and potentially, regulatory arbitrage.