AMENDMENTS TO THE RULES ON VOLUNTARY DELISTING FROM SGX-ST

The Singapore Exchange Regulation recently announced[1] changes to two key aspects of the voluntary delisting rules to enhance the protection of minority shareholders during voluntary delisting from SGX-ST. These changes, which are effective from 11 July 2019, are summarized below. 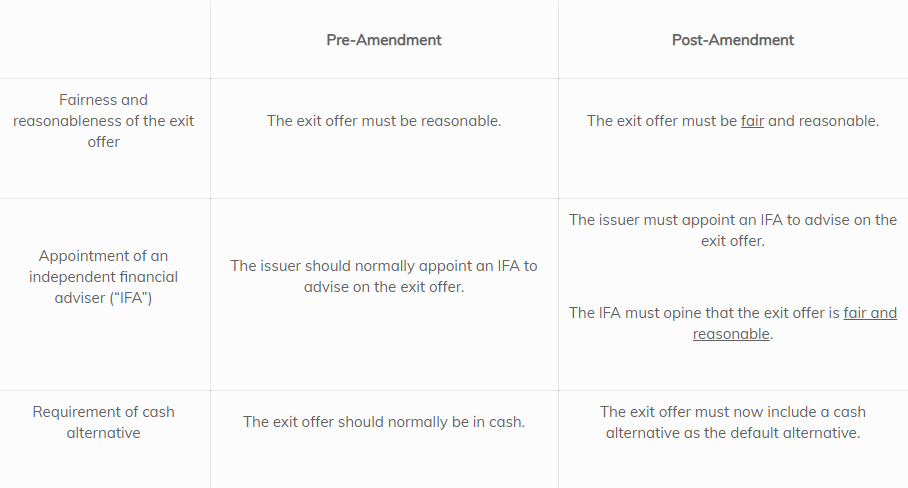 SGX has clarified that the above amendments in respect of the Exit Offer Requirements and Voluntary Thresholds for a Voluntary Delisting Resolution would not apply to:

In addition, Rule 1307 of the Listing Rules requiring the issuer to obtain the Voluntary Thresholds for a Voluntary Delisting Resolution would not apply to a delisting pursuant to a scheme of arrangement.

With the removal of the 10% block under the new voluntary delisting rules however, it may now be somewhat easier for an Offeror  to take a listed company private via a voluntary delisting exercise (as the Offeror will need instead to obtain the approval of shareholders (outside the Offeror Concert Party Group) holding 75% of the issued shares present and voting at an EGM of the company). However, the offer has to be fair and reasonable and the Offeror must have the cooperation of the board of the company to convene an EGM of its shareholders.

The changes should be welcomed by independent (and minority) shareholders, as public listed companies are now required to give shareholders a better exit value (which includes a cash component) and the resolution to delist an issuer must be passed by shareholders forming the majority of at least 75% in value present and voting (excluding the Offeror Concert Party Group). The exclusion of the Offeror Concert Party Group from the voting process is also in line with practices in other jurisdictions such as Hong Kong and Australia.

The Board of an offeree company must obtain competent independent advice on the merits of any offer and the substance of such advice must be made known to its shareholders. While previously, an offer only has to be reasonable (and may not necessarily be fair to the minority shareholders, and the independent directors may accept such an opinion), an offer will now have to be both fair and reasonable. By comparison, there is no requirement under the Takeover Code that the offer must be fair and reasonable (unless it involves a disposal of the offeree’s assets to a shareholder).

Following the above amendments to the voluntary delisting rules, SGX will be developing guidance and standards for IFAs and their opinions. We will provide an updated article on the guidelines once they have been issued, which may:

provide a suggested list of factors to be considered when determining if an exit offer is reasonable, which may include (i) the existing voting rights in the offeree company held by the offeror and parties acting in concert with it and (ii) the market liquidity of the relevant securities.

We advise both private and public (whether listed or non-listed) companies on corporate governance and compliance issues to help them acclimatise and thrive in a regulatory landscape that is becoming increasingly complex.

Besides providing general advice on director duties and corporate secretarial matters, we help our clients better appreciate the licensing and compliance regimes applicable to the industries that they operate in and review our clients’ administrative and operational procedures for consistency with industry standards.