Changes to employment laws and related regulations for older employees 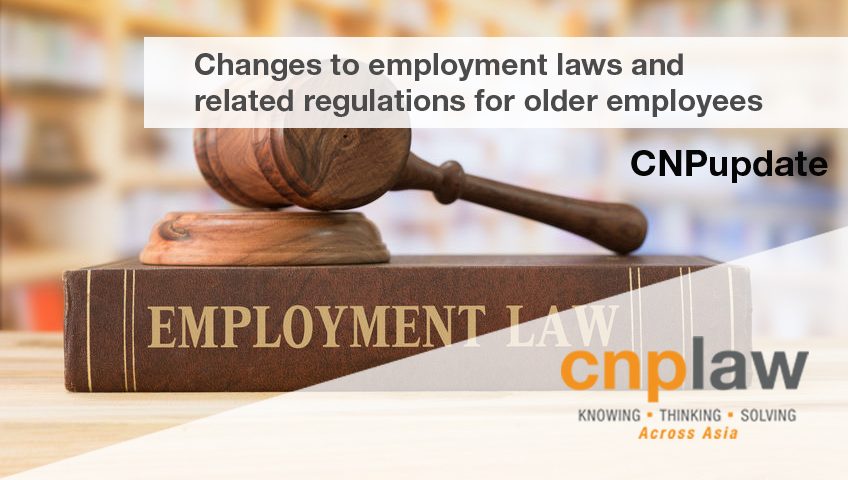 Changes to employment laws and related regulations for older employees

Prime Minister Lee Hsien Loong, in his National Day Rally speech on 18 August 2019[1], announced that pursuant to the recommendations made by the Ministry of Manpower’s Tripartite Workgroup (the “Workgroup”) on Older Workers, the Singapore Government will be:

The Ministry of Manpower confirmed on 19 August 2019 that the Government had accepted all 22 recommendations made by the Workgroup in the Tripartite Workgroup’s Report on Strengthening Support for Older Workers. These recommendations, which generally seek to achieve productive longevity in Singapore, are summarized below.

Refreshing the retirement and re-employment framework

It was proposed by the Workgroup and accepted by the Government that the Retirement Age and Re-employment Age will both be gradually raised by 3 years by the end of 2030, starting from 1 July 2022 as set out in the table below.

In addition, for employees who are employed after they have turned 55 years of age, the qualifying period to be eligible for re-employment is reduced from 3 years to 2 years of service. As at the date of this article, it is unclear whether this change will take effect from 1 July 2022 or earlier.

Under the RRA, if an employer is unable to re-employ an eligible employee despite making reasonable attempts to do so in accordance with the Tripartite Guidelines on the Re-Employment of Older Employees (the “Guidelines”), the employer will generally be required to offer an employment assistance payment (“EAP”) to the eligible employee. It is suggested in the Guidelines that:

It was proposed by the Workgroup and accepted by the Government that the minimum and maximum EAP amount will both be raised as set out in the table below.

Under the Central Provident Fund (“CPF”) Act, employers are generally required to pay the employer’s and employee’s share (which is recoverable from the employee’s salary) of CPF contributions every month, if the employee is:

It was proposed by the Workgroup and accepted by the Government that the CPF contribution rates for both the employer’s and employee’s share will be increased as set out in the table below.

In addition to the above, to mitigate the higher CPF contribution rates, the Government will be providing transitional support to employers, in the form of one-off wage offsets. 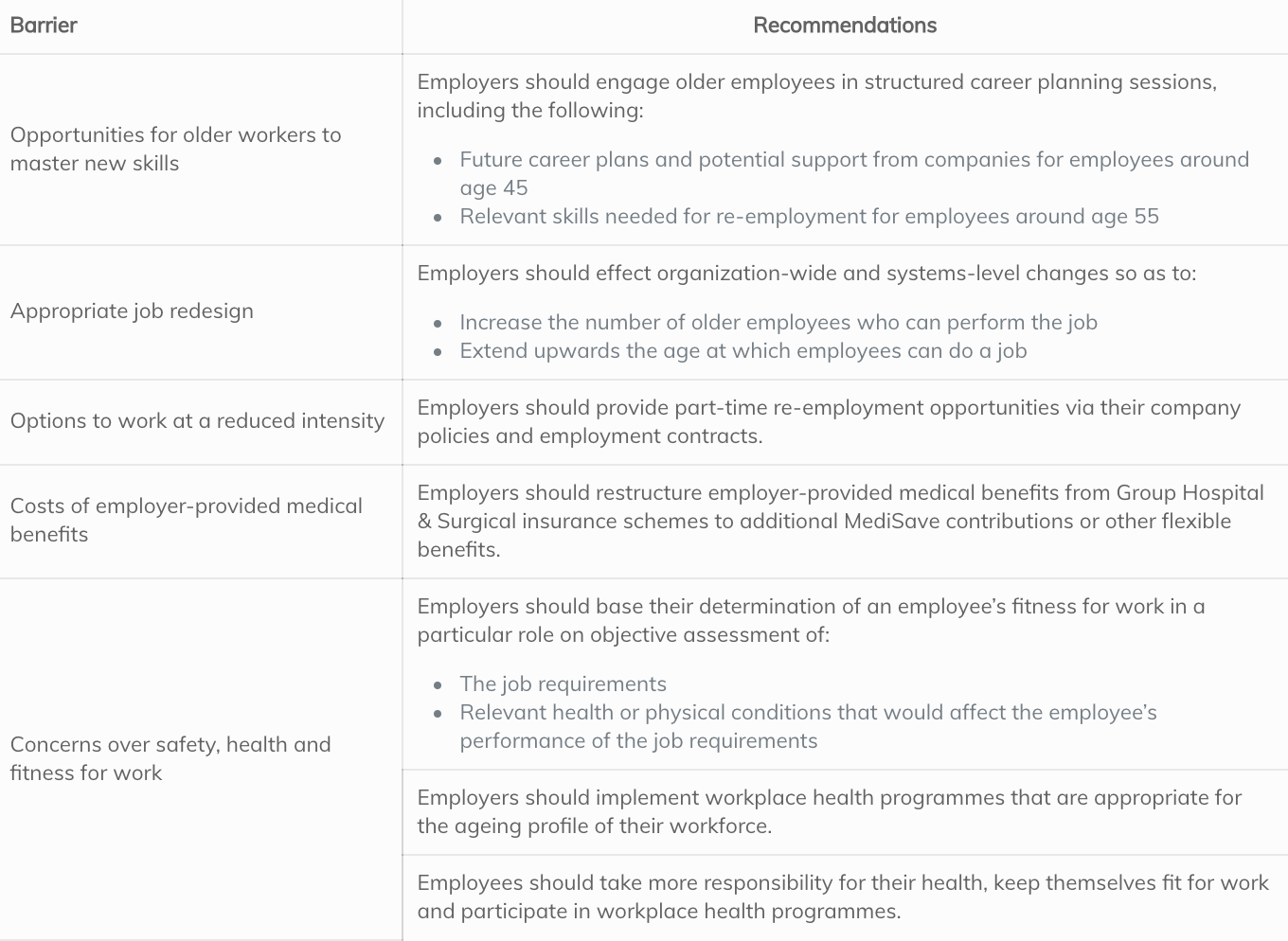 The Workgroup was of the view that the above changes in the law alone would not be sufficient to ensure a truly age-friendly labour market. As such, the Workgroup identified 5 broad categories of barriers and provided recommendations which may help to eliminate them. These recommendations, which have been accepted by the Government, are summarized in the table below.

The increasing flexibility to work longer should be welcomed by all, and especially by older employees, having regard to the increase in the number of older workers and improved life expectancies in Singapore in the coming years. Older employees, when given the opportunity to earn and save more via CPF contributions, would have more resources to turn to when planning for their retirement. While the changes would not impact employees that will turn 63 years of age before 1 July 2023, this is nonetheless a big step towards preparing Singapore for the future economy and transforming the work industry into one that is more inclusive and which benefits all segments of the population. We look forward to future guidelines and incentives that may encourage employers to build a more age-friendly workplace and will keep you updated once they are available.

[2] *Whilst it had been proposed by the Workgroup and accepted by the Government that the targeted CPF contribution rates should be reached by 2030, this timeline is a flexible one and may stretch beyond 2030 if deemed necessary.


Get To Know The Authors

Pradeep acts for corporations, whether they are private or listed companies, on all aspects of their business including advice and drafting of documentation on investments, joint ventures, mergers and acquisitions and restructurings.

Pei Ling has over 19 years of legal experience and has advised clients with Malaysian and Singaporean interests on their cross-border transactions, joint ventures, investments, commercial and technology agreements. She is qualified to practise law in Singapore and Malaysia

Marvin is an Associate in the Corporate Advisory team. His main areas of practice include corporate advisory and general employment matters. Prior to joining CNP, he trained and practised at a leading commercial law firm, under the practice areas of commercial litigation and international arbitration.