This article provides a general overview on the present factors that determine the tax treatment of hybrid financial instruments and a discussion on how the Organisation for Economic Co-operation and Development’s (“OECD”) recommendation under the Base Erosion and Profit Shifting (“BEPS”) Action Plan 2 may alter the way hybrid instruments are treated for tax purposes in Singapore.

Hybrid financial instruments, such as redeemable preference shares or convertible bonds, are a cause of contention and uncertainty in terms of their tax treatment.

Distinct from traditional forms of financial instruments, hybrid financial instruments exhibit both debt and equity-like features, raising concerns on which side of the debt/equity dichotomy that the Inland Revenue Authority of Singapore (“IRAS”) would classify the instrument for tax purposes.

At present, there are no specific provisions in the Income Tax Act (“ITA”) that stipulate the considerations or factors in determining the nature of a hybrid instrument (i.e. whether it is classified as debt or equity). Present methods for classification

On 19 May 2014, IRAS published an e-tax guide on “Income Tax Treatment of Hybrid Instruments”, illustrating the approach in determining the nature of the instrument for tax purposes.

Instead, IRAS elects to approach the task with a two-stage approach:

In its e-tax guide, IRAS lists a range of non-exhaustive factors which are summarised in the table below: 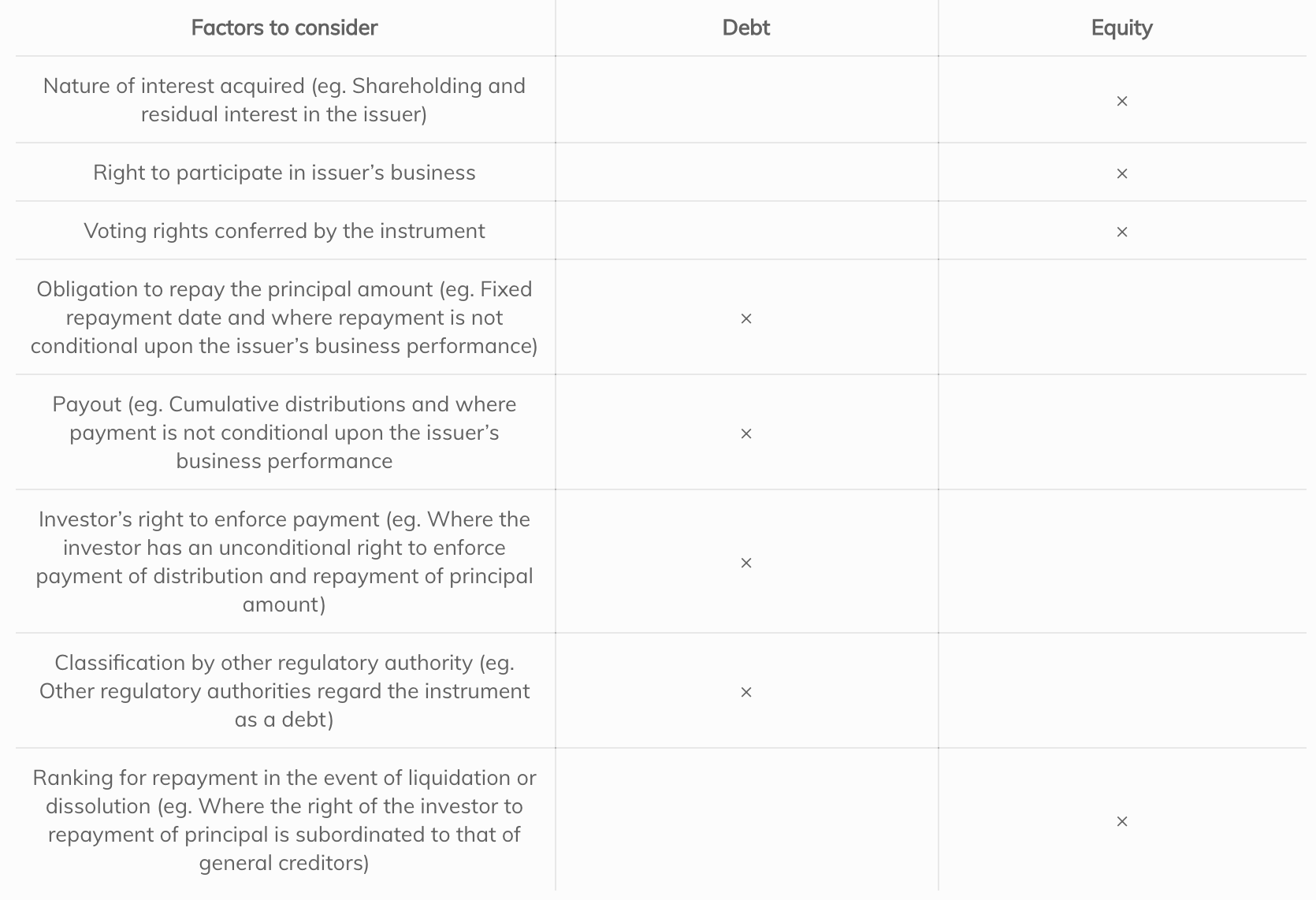 It is also expressly stated that the presence of any single factor does not necessarily in itself lead to the classification as either debt or equity; all factors are taken into consideration.

From the issuer’s point of view, given the lack of a definitive position by IRAS, it may be advisable for Singapore-based issuers to seek an advanced tax ruling on the anticipated characterisation by IRAS.

Where a ruling is obtained from IRAS, the issuer is required to communicate this to investors or prospective investors through appropriate channels such as the offering circular or on their website.

In relation to the classification of hybrid instruments issued by a foreign-based issuer, IRAS has expressed that it would apply a similar approach to the above.

Additionally, IRAS has stated that it would take into account the classification of the instrument in the country of the issuer. This approach appears to be influenced by the OECD’s recommendations under BEPS Action Plan 2 to address mismatches in the tax treatment of hybrid instruments across jurisdictions.

However, IRAS’ approach falls shy of full compliance with the recommendations under BEPS Action Plan 2, which will be further explained below.

In brief, the recommendations take the form of linking rules that align the tax treatment of an instrument with the tax treatment in the counterparty jurisdiction. The proposed rules would apply automatically and there is an order of rules in the form of a primary rule and a secondary rule.

The primary and secondary rule

If the primary rule is not applied, then the counterparty jurisdiction can generally apply a secondary rule, requiring the deductible payment to be included in income or denying the duplicate deduction depending on the nature of the mismatch.

However, it must be emphasised that the coordination rules only address the mismatches in tax outcomes in respect of payments made under the hybrid instrument without affecting the commercial outcomes. As to whether the hybrid instrument is classified as debt or equity for tax purposes, it appears that this remains determinable by the respective domestic laws of the jurisdiction.

Implications on the present IRAS approach

As alluded to above, the present IRAS approach does not incorporate the primary and secondary rule approach as recommended under BEPS Action Plan 2. IRAS’ approach is focused on the factors identified earlier and it is noteworthy that the classification in another jurisdiction is merely a factor and not in itself conclusive of the tax outcome in Singapore. As a result, double nontaxation remains a possibility based on the present rules

A few noteworthy considerations must be pointed out before further discussion:

It is uncertain whether Singapore will act upon BEPS Action Plan 2 or introduce substantial change to its present regime any time soon. As such, it may be prudent to review multi-jurisdictional hybrid instruments to examine how they will be treated in both payer and payee jurisdictions, particularly if the counterpart jurisdiction has adopted the BEPS Action Plan 2 steps in a substantive way.